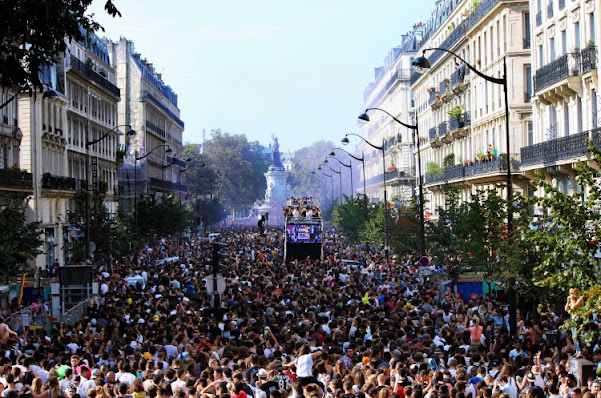 From 12-7p this Saturday the Techno Parade will commence again. It was cancelled earlier in the year, and the date was postponed to the 18th. I completely forgot about it. To be fair I’ve never attended it. 1) because I hate parades and 2) I haven’t been to a rave since 2003. Much less a daylight rave.

But for those that want to see a Paris institution, in it's now 22nd year, you can be a part of it this weekend. Albeit a scaled down version perhaps. It may be a bit different in a post Covid world.

For those that do not know what it is, the Techno Parade is basically a walk through the city. DJs play and you walk a route whilst dancing and partying. It’s kind of like a Pride festival.

Some people go all out in costume. I once knew this family where the mother literally dressed in fishnets, stripper heels, and a blazer, nothing else, and the husband dressed in his Royal Marines uniform. The daughter dressed up as a mermaid with a seashell bra. So oddly enough it’s also a family event, but also a rave? Yeah it just never seemed appealing to me. Not my cup of tea, but maybe one year I'll finally give it a go.

The list of acts playing this year are here: http://www.technoparade.fr/les-chars/