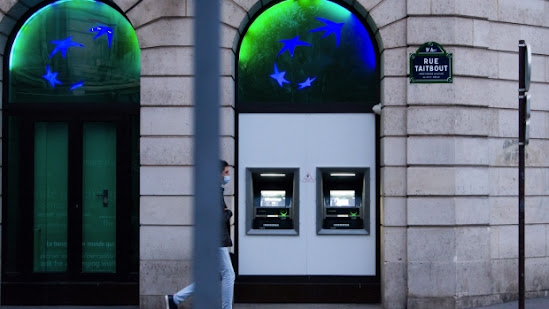 Using your debit card in France can suck. I have Bank of America so I get charged a 1% transaction fee whenever I use it. I’ve gotten used to it so I don’t really care, and I’d rather that than ever have Société Générale again, but if you’re more of a penny pincher than I am, you probably want to use a credit card. Most credit cards don’t charge foreign transaction fees, but I so often forget to use them. It’s just habit to grab for my bank card. Be smarter than me.

Even worse than transaction fees there are fees to use ATMs in France. Usually. I used to use my Amex so I could get around that. But sometimes I need to pay the drivers who take me home from the airport and they only take cash. Very few have credit card machines. It’s annoying.

If you use Uber or G7 you won’t have this issue. However I like knowing a private car will be waiting for me. Even when my flight is late (once I was supposed to arrive at 9pm but didn’t get in until 11:30p), they pay close attention to the flights and are there no matter what. For me it’s peace of mind.

Luckily Bank of America is apart of the Global Alliance network (as is Barclays, BNP, and Deutsche) so I can usually have the drivers stop at BNP on avenue Bosquet. Bosquet is like a few hundred feet from my house but it is on the opposite side of the street so the driver has to pull in there, go back up and then back down. If I took a taxi they would complain, but the service I use is always fine making the stop so don’t be afraid to ask. They know that ATMs at the airport charge higher fees, and don’t mind going out of their way.

Though most French don’t understand this because their banks cannot legally charge them such idiotic fees, and they’re always kind of like ‘what? You have to pay for that?!?’. And then proceed to look at you like you come from another planet (the planet of Crony Capitalism 🇺🇸 I’ve been reading books on the Federal Reserve so I’m bitter).

I would totally suggest checking your bank’s website for their partners. If they have any. I used to have Chase and I know they had something set up because I used it in London. Most of the bigger name banks do. Although these days they’ve become quite cheap, and will only offer the service for certain accounts (read the ones who need a minimum balance of $100,000). You’ll need to look in the fine print but the information is there.

That said if you don’t want to ever have to use an ATM do not fear. There aren’t very many reasons to need espèce in France. The rare places are the boulangerie (some will charge you a minimum for CB), sometimes the metro but very, very rarely, and there are those bodegas that aren’t really bodegas, but they’re France’s answer to a bodega, they usually like cash too. You really only need those places at 1am when everywhere else is closed. And my neighborhood, Gros Caillou, is bougie af, so we only have one in the whole like 1 mile radius, if it still exists (it’s on the La Tour Maubourg side hidden down rue de la Comète). You can just avoid those places if ATMs are too much of a headache.

Update: I ended up opening a bank account with Capital One. I associate them with credit cards and forget that they have regular banking as well. They do not charge any foreign transaction fees on debit purchases, ATM withdrawals, or exchange rates.