Christian Kinnersley and the Disappearing Site 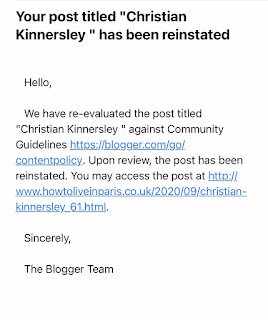 I tried to move the site to another hosting site because Christian/Christian’s family are still attacking the blog. They keep reporting it to Blogger in the hopes Blogger will delete my site. However I wasn’t getting continuity with Search Console so I put it back for now. You’ll notice the site has a new look. That’s a byproduct of the failed site move.

I promised I wouldn’t update this site anymore, and I wasn’t going to, but Christian found a work around, and has been spamming Bloggers “report” feature. It’s aggravating. I hate dealing with this site, so being forced to check back here is an inconvenience, and generally just bad for my mental health.
Christian’s twin brother Henry Kinnersley, or someone using his Facebook account, recently contacted me under the guise that he was trying to help our situation. But he was trying to manipulate me. Manipulating someone is in and of itself heinous, trying to manipulate someone who is already going through so much is just depraved.
Sadly I fell for it. I know, I’m such a gullible idiot because I think good people exist in the world, and that peace can be achieved. I want to achieve peace with Christian. Silly me.
I’m sure they’ll all sit around at “dinner” laughing about how they got one over on me (when Christian comes back from his cycling trip with friends “abroad” #WhiteMalePrivilege #StopTheSpread). That family really is repulsive and vile. Every time I envision them I see them as that pack of hyenas from that episode of “Buffy”. They will do anything to get their way. It’s weird how some people are so morally bankrupt.
“Henry” got upset when I wouldn’t let him mansplain my experience to me. He kept telling me what occurred, and what didn’t, and I found that to be odd considering he had no knowledge whatsoever of our relationship. In fact I had never met him or spoken to him before. But he believed he knew everything. When he couldn’t get what he wanted from me he became angry. I’m not even sure what he wanted, he never got around to saying.
He and Christian really are twins, they act the same way; flatter and pander to manipulate, then anger, and aggression when they don’t get it. He told me that he is going to make sure I’m fully “prosecuted and justice [is] served”. Proclaiming “justice” is real rich coming from a guy who travels every year to the US and commits immigration fraud by illegally working in Austin on a tourist visa, and not obtaining a work permit. I’m not going to argue with someone who can’t be objective and act diplomatically. It gets you nowhere. At no point did I become irate with him. I found his reaction out of line so I ignored him.
Speaking to whomever that was, and looking through old photos, made me regress back to the headspace I was in the last few months. I had stopped hoping that Christian and I could have peace, and for a brief moment when his brother lied about wanting to help, I thought we could have it. It really set me back in a lot of ways. I had a drawn out depressive episode. Hope is a secret killer. I’m waiting for the emotions from that little encounter to subside.
I had been having a tough time the night before he contacted me. I was trying to make an Insta for the blog because a literary agent suggested I would have a better chance of getting my Billingsley books into the bigger publishing houses with a social media following. I know Bloomsbury is asking for too much, but a girl can dream. I looked through old photos and made pages, but I won’t be updating them.
Looking through photos reminded me that I experienced A LOT over the last 6 years, much of which I had forgotten, a lot of which I didn’t even write about in the blog. But 2018-20 was too difficult to write blurbs for. It brought up a lot of memories. It made me miss Christian a lot. It made me forget everything that happened. Our time from Belleville and before was really happy. I watch the videos of us, and it’s so strange the way relationships can take a turn. I never thought I would lose him from my life.
There are enough photos on there. I don’t think I need to add more for people to get an idea of what ‘my Paris’ was like. Besides I can’t stomach adding more so they will have to suffice. Most of the photos have memories attached to them so I tried to write a blurb about why it’s significant.
If anyone has any questions, you can now try asking through my new main Adventures in Paris. Some of you found this website via that channel so you already know about it, but someone mentioned that the comment form wasn’t working. Sorry, I didn’t check the comments, and I have closed the comments for all posts, so try the contact form there if you have any questions. As always feel free to reach out to me with any questions. Thanks for reading the blog, and I hope you have a happier journey in Paris than I did.
Labels: Christian Kinnersley