The More You Know: Les Vacances 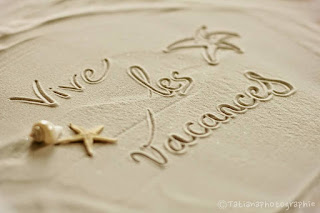 As an American France is a hard place to understand. And one of the things I had trouble understanding was “Les Vacances”. You see every 6 weeks French children are given 2 weeks of vacation (and sometimes they have Wednesdays off, or half of Wednesday off, and sometimes they have to go to school on Saturdays. It all depends on the school).
Now you might be thinking to yourself what does that have to do with me, I don’t have children? But these vacations affect everything; trains, traffic, work, and your own vacation. If you’re lucky you’ll live in a neighborhood with a large population of second home owners (like the 7é arrondissement). During these vacations most people are away, and there’s a nice calm that takes over the neighborhood.
This is nothing like July and August (les grandes vacances), which were the worst for me. Not just because air conditioning isn’t standard for every home and business, but because I hated the empty “28 Days Later” feeling that swept over Paris. I once lived on Breteuil during the summer, and no one was around except the annoying teenagers who made the grassy bit in the middle their go to summer nightclub from 10p-3a. Montmartre fairs better because of the tourists, but who wants to be stuck with a bunch of tourists?
Anyhow every 6 weeks you’ll see less traffic on the roads (especially around schools), and train ticket prices go up as people leave. Some people even pull their kids out early to beat the traffic and train costs. You’ll notice less kids around (unless you’re in the 16th where apparently people there can’t afford vacations or second homes), and more people loading up their cars, or people standing outside their buildings with cases of luggage. This will be the cue that things are going down.
These vacations happen in October around Toussaint, December, February (ski vacations), and April. You’ll have the once a week bank holidays in May. And of course summer vacation during July and August. The May bank holidays aren’t technically “school holidays”, but if they happen every Monday or every Friday, you’ll notice people leaving every weekend. They tend to take extra days off to get a long weekend.
I used to know someone who chose not to take their vacation during the standard July or August because he preferred to be in Paris. The cost was cheaper to use it during other times of the year, and there were less Parisians around. Parisians really hate each other.
If you want to know beforehand when the next les vacances are they post the dates in advance yearly. France is large so there are 3 different date schedules. For example Paris usually falls in zone C, so their vacations will be different from a kid who lives in Cannes or Bordeaux. But only by one week. Really pay attention to what department has what week. I once thought zone A was zone C’s dates and messed up my planning.