Quick Tip: The RER to the Airport 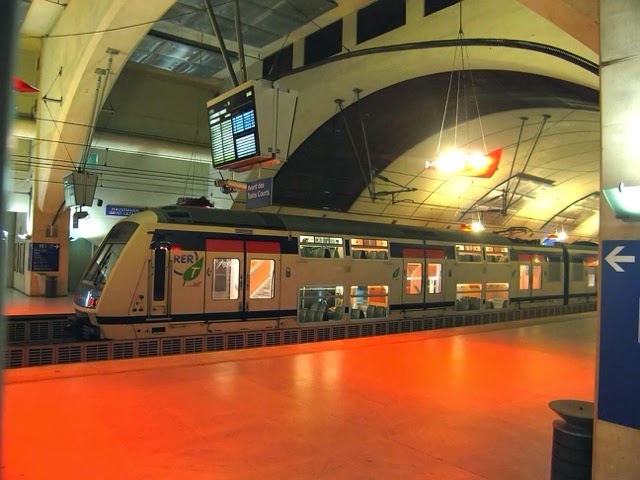 Since I wasn't taking any luggage with me I took the RER to the airport. Earlier I had to go to Champs Elysees and then 2 trips to Place d' Italie, but I wasn't paying attention when I took line 1 to line 6, and I got in the station before (or after depending on your direction). I took the line all the way to Nation so at this point (6 trips) I wasn't in the mood to spend any more time underground. But this is me after all and I was running behind. I couldn't miss yet another flight. I had already spent the price of a new ticket on 3 change fees so I said 'fuck it' and made my way.
I didn't really know what to expect. I mean it's the metro but someone tried [badly] explaining to me how it worked and I was bit confused. Since my metro was Monge I took the 7 to Châtelet. I tried buying the RER ticket at Monge but I didn't understand the screen and the guy at the ticket booth was an asshole. He started yelling "Opera!" at me so I just told him to piss off and decided I'd get it at Châtelet.
When I got to Châtelet I followed the signs and just my luck when I got to the RER ticket stands the machines weren't working and there was no one in the booth, so I had to go back up the 50 million stairs to the Rivoli exit and buy it. The ticket runs €9.95.
Once I got back down I had to depend on the signs again. The signs once you get to the platforms are a bit confusing, but I found the platform for B. This is where the screens come into play. The line splits so you have to make sure the upcoming train is going to CDG, and going to your terminal, so know the terminal beforehand. The monitor by the escalators will tell you what time the upcoming trains are expected to arrive. And the signs on the platform will tell you which train is coming in next. Luckily the next one when I arrived was a non-stop to Terminal 1. Once the train reached Terminal 1, I had to walk a bit and down some stairs to another train that takes you right to the terminal.
Make sure you have your ticket on hand because when I got off a bunch of men were checking everyone's tickets. I had stuck mine in a pocket so like a numpty I had to search for it. In fact I thought I had lost it, which would have been ironic since I never, ever throw my used tickets on the ground (really France invest in some that dissolve in water). And then to get out you have to feed your ticket through the machine again.
The whole thing took me a little over an hour. If I had had more luggage I probably wouldn't take it. I prefer the convenience of taxis afterall. But since all I had was my purse it seemed efficient enough.
Labels: Airport Transfer Flying Getting Around Metro Public Transportation Subway The Tube The Underground Travel